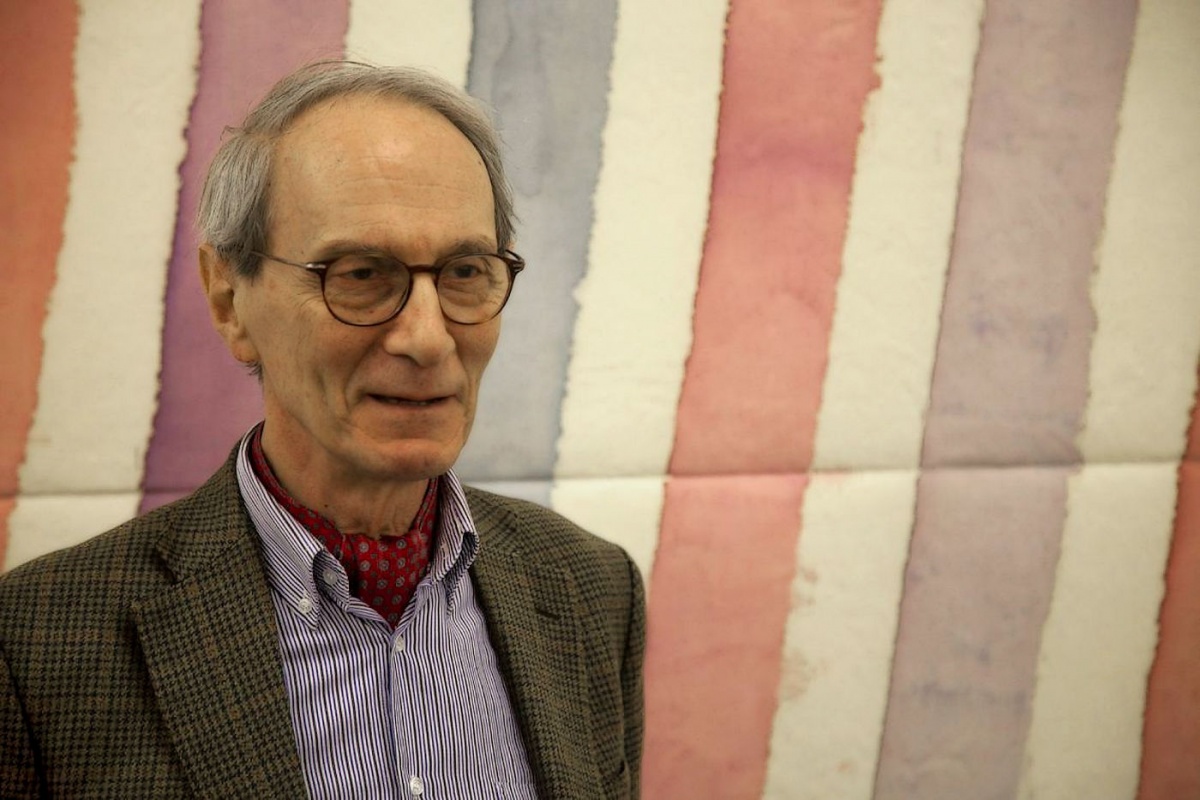 Giorgio Griffa was born in Turin in 1936. In 1958 he obtained a law degree and began his activity as a lawyer who would never give up. For ten years he studied painting until in 1968 he decided to give up all representative elements. In those years he breathed the Turin atmosphere of Arte Povera. However, while the poor people abandon the brushes, Griffa strongly believes in painting and re-interprets it with the most basic traits (points, lines, signs, etc.) that have always been present in the hand of Man and therefore indispensable. He immediately eliminates the frame that limits the field, and is fascinated by the un-finished. In each of his works he never fills the canvas and this while on the one hand leaves room for imagination, on the other he makes each work the ideal continuation of the previous one. In this way he studies the strongly symbolic character of human experience that "has thirty thousand years of memory". His work is thus based on the Primary Signs and this will be his unmistakable imprint.

It starts immediately with important exhibitions first from Martano (1968) and then from Sperone (1969). Already in 1970 he was noticed by Ileana Sonnabend who set up two exhibitions, first in New York and then in Paris. After the cycle called Quasi dipinto, between 1973 and 1975 it performs almost exclusively Horizontal Lines. In the following years he began to coexist on the canvas sequences of different signs: it is the cycle of Connections. These are the years in which he makes use of a minimalist reflection for a new consideration of the imposing memory of painting. Warning: Griffa is far from minimalist. Indeed, for him memory is the foundation for which he uses precisely those simple signs "that belong to everyone's hand", to highlight his "putting himself at the service of painting", "relying on the memory of painting", "limiting himself to the simple gesture of placing the brush". In 1978 he was invited to the XXXVIII Venice Biennale. In 1980 he had a personal room at the XXXIX Venice Biennale. In the 1980s with contaminations he often flanked the signs with wide background painting, that is, he also uses color always as a memory of painting. At the beginning of the 1990s began the important cycle Three lines with Arabesque in which each work always contains, among other signs, three lines and an arabesque. The purpose of numbering is to set the time of execution. This cycle is joined by that of numbering. Here the numbers on the canvas indicate the order in which the various colors were laid. In this case, the number series emphasizes the time order and the very development of the event in space. Since 2008 he has been working at the Golden Section and introduces among the signs that irrational number without end that never proceeds or approaches the next one but instead screws into the unknown, a kind of explanatory note of his work. According to Griffa, painting has the task of making the unspeakable known, of revealing that unknown that science is unable to reveal.

Among the most recent personal ones are those at MACRO in Rome in 2011, at the Mies Van der Rohe Haus in Berlin in 2012, at Trinity College Dublin in 2014, at the Centre Art Contemporain in Geneva in 2015, at the Kunsthalle in Bergen 2015, at the Giuliani Foundation in Rome in 2016, at the Fondation Vincent Van Gogh in Arles in 2016, at the Serralves Museum in Porto in 2016 , at the Camden Arts Centre in London in 2018, and the one now close to the Lille Museum.

In 2012 for her exhibition "Fragments 1968-2012" at the Casey Kaplan Gallery in New York, Roberta Smith wrote in the New York Times: 'Her art deserves a place in the world history of abstractionism.' His works are in the most prestigious private and institutional collections, in Italy and abroad. In 2013 the Tate acquired the large canvas "Horizontal Signs", 146x188 cm, from 1975, and put it on permanent display.

In 2017 he was again invited to the LVII Venice Biennale.

Analytical Painting, otherwise called Painting-Painting,developed in Italy in the late 1960s on the back of similar French and German experiences. Analytical Painting is detached from the relationship between the work and its meaning, obvious (figurative) or underlying (conceptual) or expressive (abstractism), but focuses on a kind of introspective investigation of the intrinsic elements that constitute it, namely canvas, frame, color, sign, and the relationship between the work and its author. The epicentre of this movement was certainly Italian and was carried out by a large group of artists including Claudio Olivieri, Elio Marchegiani, Riccardo Guarneri, Giorgio Griffa, Rodolfo Aricò and Gianfranco Zappettini. The movement had international resonance consecrated by exhibitions at European private museums and galleries, including The Museum of Modern Art in Paris, the Venice Biennale, Documenta of Kassel. The drive that Analytical Art had in the artistic environment resulted in the Trans-Avant-garde,a movement that led to the reappreciable appreciation of painting Tags: Analytical Painting - Painting Painting - Riccardo Guarneri - Gianfranco Zappettini

May 2021. For some months there has been a continuous growth in giorgio griffa'smarket prices, with an accentuated difference between the works of the 70s, certainly the less pleasant ones, and the subsequent ones. Despite a fair presence of Griffa's works on the market, the increasing price trend is however due to a shrewd management of the production both by the artist and by the reference gallery that is the Kaplan of New York for a decade now. To give some ideas a work of the 70s size cm 50x70 can cost up to € 20,000 while for an equal size but recent the cost is around 12,000 €

In this section are inserted excerpts of writings made by Griffa himself,by curators, critics, art historians and anyone who expresses an original thought on the artist's work. This work is done with the aim of making griffa's way of making art better understood, to make better understood.

I represent nothing, I paint. Giorgio Griffin 1972

I started painting in '68 thinking about Zen, the philosophy that what you stop to look at, the moment you stopped, has already passed by and is already something different. Time and its passing dynamically can be read in the rhythmic repetition of the sign, each gesture, although apparently equal to the previous one, is actually different and therefore creative and, even in its repetition, never the same. At first, when I painted lines close to each other, I didn't bother to govern my hand to make the lines look the same. Because rhythm does not mean monotony but rather represents the exact opposite. My work, in fact, I believe comes from the rhythm of knowledge, life and nature. Giorgio Griffa, Belluno 2012

The repetition of the signs fixes the space from the inside instead of defining it from the outside. At one time, when defining the world by looking at it from the outside, men invented two extraordinary systems to describe space: the golden section and perspective. The golden section defined an absolute space, ineffable, suspended. Perspective fixed the hierarchies of vision in a sublime and static system. Enrambe also used mathematics. The boundaries soon became mobile, for example the Baroque, and as the awareness grew that we observers ourselves are part of the observed phenomenon, those visions did not wear out, humanity did not throw anything away, but they came to change in a dynamic vision, they shifted their boundaries, as the Venetians did with light. Giorgio Griffa, Turin 2005

In our tradition the ancient question of line and color (......) has determined a preferential use, I say in a coarse way, of the line to draw the shapes and color to fill them. Other cultures teach that color can be resting on the support in very varied ways, that it can be sign, rhythm, shapes without the need for a line that designs it. One aspect of the matter is therefore to reduce the difference between sign and color to the simple physical consequences of the width of the brush and the way in which it is resting on the canvas. The color can be surface, sign, cross-cross, sequence, timbre, tone, rhythm, line, and propose each time a different notation of its relationship with light and shape.  Giorgio Griffa, Bergamo 1995

When I'm going to paint, I just set the rules of the first signs and start occupying the space progressively, without giving a complete organization. I therefore try to follow what the signs themselves ask me to do. A kind of careful passivity. This attitude excludes the desire to superimpose my memory on that of painting. It is the signs and colors that bring their suggestions and memories, to which the viewer will bring his, with results that in any case come out of my will. My story remains indeterminate because I believe in the intelligence of matter, and this brings me closer to many aspects of contemporary art that does not contemplate painting. Giorgio griffa, Turin 2005

In the early 1990s I did a cycle of works called "Three Lines with Arabesque"because in all of them there were three lines and an Arabesque. I was interested in arabesque because it brings together linear time and circular time. The Arabesque goes back but goes on. There is the linear time of science and the circular time of Greek thought,. I started to number them progressively because I wanted each of the elements of this group to have its own identity. Giorgio Griffa, Venice Biennale, 26 May 2017

Like every other act of life it is always new and unrepeatable by its nature and there is no possibility of totally identical acts throughout the history of humanity, every sign is exemplary for itself. Exemplary, therefore new and not subject to aging in any case. The demand for novelty has been replaced by the consideration that novelty is inevitable: even when, as in my work, there is nothing that has not already been done after the others, that is, there is nothing that others have not already done. Giorgio Griffa, Rome 31 May 1979

I have absolutely no idea why I choose the first color. Only the first is free, the subsequent colors are determined by those that precede them, so there is actually an internal logic and I perceive it with my eyes, with my hands, mixing colors. I use water colors because they have a relationship with particular light that, for example, do not have the colors of oil painting. I feel at the service of color, let's go back to the intelligence of matter, in this case, the intelligence of light. Giorgio Griffa, Milan 2015

Painting the becoming means that painting paints its own Farsi, its becoming reality, one sign of the other. This is what has always happened, but it was subordinated to other aspects that were from time to time initiation, representative, magical, celebratory, narrative, etc., aspects that painting continues to bring into its immense memory. I prefer to leave them undetermined, precisely so as not to divert attention from becoming. Giorgio Griffa, Milan 2009

If it is believed that the historical sediment of painting is, among other things, his inner ability to make images, it follows that the artist can strip himself of the task of processing these images and they coincide exactly with the anonymous sign of the brush. Giorgio Griffa, Rome 1979

If we look at the works of the past we know that artists such as Leonardo and Michelangelo left some unfinished works, we do not know whether deliberately or for lack of time. This means that the historical time of the realization is over at the moment when the artist no longer put his hand to the work, but the intrinsic time of the work remains suspended and in this case it is the viewer who ends it by imagining the work accomplished. Thus Griffa's works,elusive, light, impalpable, are suspended in time available to anyone who wants to finish them according to their disposition and sensitivity. Galleria L'Incontro,Chiari 2021 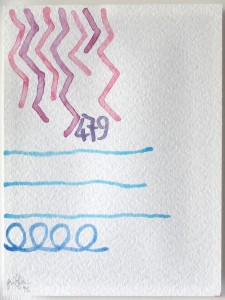