[...] Del Pezzo,who had moved to Milan since 1960, at the invitation of Enrico Baj and Arturo Schwarz, began to forge his own language, in which at the time the suggestions and influences, variously combined, of the nuclear movement, surrealism and metaphysics, Burri and Tàpies were evident. In those works there are filaments and tensions, real and symbolic, that seem to want to tighten, hold together and connect together the objects, which would later acquire, in Del Pezzo's works,their own, clear expressive centrality. These connections, in fact, will soon decay, the painting will unhinge and also strip of the filamentous and calcified sarcophagus of the material, to present us first elements of the decorations and architectural reliefs, and then isolated objects in the silence of their vital solitude, somehow caught in their mutual separatedness and distance, without visible bridges that put them in communication, with any relationships between them entrusted to the pure visual force of their presence, to their ability to become an element of a discourse, a chain of meaning that continues and develops only with the help of other forms, other objects that are equally solitary, in contrast or harmony, next to them. Italo Calvino, in 1978, in his "Paraphrases", presentation text at the Bellechasse Gallery in Paris, makes one of his mysterious travelers say that "it is enough for two signs to turn to each other so that their dialogue says things that we could never make him say. Among the insignia of a city there are never monologues but duets, trios, sexts, symphonies in which the entrance of each new interlocutor changes the whole discourse". In the last fifty years, Del Pezzo has sailed non-stop in the sea of these symbolic objects of his, bending them to the representation of his inner travels, to the insights that germinate in his drawings — how to forget those, really splendid, bowed, that make him one of the most sure contemporary designers of interest? —, to the progressive acquisitions of an expressive capacity that, mixing memories of surrealism and abstraction, dada and nouveau réalisme, pop art and minimalism, has given a completely peculiar style. There are those who have observed, et pour cause, affinity with the work of Louise Nevelson and Joseph Cornell, Joe Tilson and Eduardo Paolozzi. We note that there is sometimes, in his works, the line of the horizon, but the earth and the sky are also stretches of color, without trees or clouds, pure mental concepts, therefore, inhabited by geometric solids and strange objects, or furrowed by unlikely flying machines: more than a landscape, a theater of the absurd of the world — Alchemical theater has named Del Pezzo one of the works of charm and disturbing mystery in this exhibition at the Galleria d'Arte L'Incontro. The works on display, carried out in recent years, are a very happy, calibrated and always high-level choice. They re-propose the world of severe, rarefied artist enchantment: a Chessboard( now in the present exhibition) that seems to pass, accompanied by a court of wandering star objects, inside an infinite with an unmeasurable depth, alluded to by the gold leaf,which indelibly characterizes and is the background in other paintings: Gold Shelf, Marble Fake Gold Shelf, Gold and Red Shelf and Filing cabinet in Red. In front of his paintings it is natural to feel the amazement that marks the children's in the real world, the encounter with the unexpected and never seen, when the gaze is still clear and ready to be seduced by the pleasure of a discovery. Moreover, Plato said that geometry is important because it opens the mind of those who want to understand it: it does not matter the level of understanding of a figure, but the feeling that inspires and guides its interpretation. Therefore, in front of Del Pezzo's works it is necessary to place one another with this tension and this abandonment to the enchantment of ringing shapes and colors, measuring the order and harmony of these objects, their skilful "theatrical" combination, guessing the charm of an enigma that cannot be immediately explained. They are, those of Del Pezzo,puzzles imbued with play and irony, the result of a vigilant freedom of doing and creating, in the name of that "libertinism of ideas" dear to Leonardo Sciascia, always ruled by tension to an order, to an architecture of the work — André Pieyre de Mandiargues defined, in 1975, Del Pezzo as an "insubordinate architect". The youthful dream of architecture, the study of surveying have become in Del Pezzo works in which the apparent irrationality of the dream and the constant need to recreate an order of forms and structures that deny the disorder and barbarity of reality have combined and fused, that within the strangeness they find meaning — as if to get lost basically to find themselves. The artist confessed in 2001 what he tried to make in his works: "The pretext of reality, the dream, the memory or just the memory of a form, glimpsed in a thousand journeys — a paraphrase of the classic, literature, architecture, the shorthand of the unconscious, the notes of a great whole; the notes and there are thousands, millions, these shapes that are composed a little at a time and return from time to time modified, a little limated, in different works, the tiles of an immense mosaic, the diary of a creator of shapes, who is desperate for reality". (excerpts from the text by Sandro Parmiggiani published in the catalogue of Lucio Del Pezzo'ssolo exhibition, Galleria Arte 92, Milan, 2012) 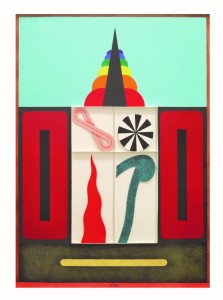