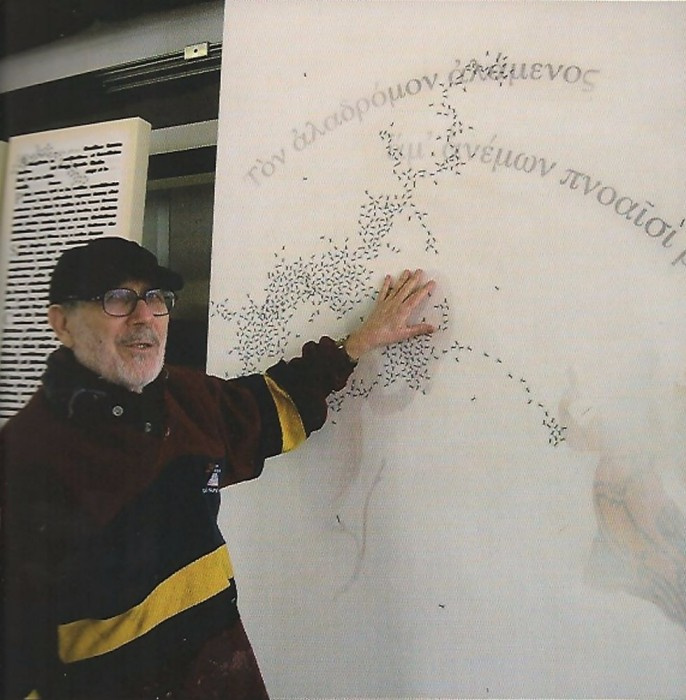 Emilio Isgrò (Barcellona Pozzo di Gotto, 6 October 1937) is an Italian artist and writer, known for the artistic language of "erasure".

In 1956 he debuted with the collection of poems "Southern Fairs" (Arturo Schwarz Publisher). In 1964 he made the first erasures on encyclopedias and books contributing to the birth and developments of visual poetry and Conceptual Art. In 1966, on the occasion of the staff at the Galleria Il Traghetto in Venice, he published Declaration 1, in which he specified his conception of poetry as "general art of the sign". He published the book of poems "The Age of Gymnastics" (Mondadori).

In 1972 Emilio Isgrò participated in the Venice Biennale, where he was present again in 1978, 1986 and 1993. He exhibited with other artists at the Contemporary exhibition (1973), curated by Achille Bonito Oliva and set up in the underground parking lot of Villa Borghese in Rome. The following year he releases "The Adventurous Life of Emilio Isgrò" in the testimonies of state men, writers, artists, parliamentarians, actors, relatives, family, friends, anonymous citizens (Il Formichiere), caandidated for the Premio Strega. In 1976 he held the first anthology exhibition of his works at the Center for Studies and Archives of Communication in Parma. In 1977 he was awarded first prize at the 14th Art Biennale in Sao Paulo, Brazil. In the same year he published with Feltrinelli the novel "Marta de Rogatiis Johnson". In 1979 he presented at the Rotonda della Besana in Milan "Chopin, installation for 15 pianos". In 1982, he represented "Gibella del Martyr" where San Rocco reads the list of miracles and horrors in Gibellina.

From the following year, and for three consecutive seasons, Emilio Isgrò represents the Oresteia di Gibellina, Sicilian trilogy, at the International Festival of Orestiadi. In 1985, the Teatro alla Scala commissioned him to install the multimedia installation "The Vigil of Bach", made in the Milanese church of San Carpoforo. In 1986 he presented the installation "The Italian Hour" at the Archaeological Civic Museum in Bologna, in memory of the victims of the massacre at Bologna train station on August 2, 1980. In 1989 he published the novel "Polifemo" (Mondadori), at the same time developing a new "Theory of Erasing" (Fonte d'Abbisso Galleria).

In 1992, he participated in the exhibition The Artist and the Book in XX Century Italy, organized by the Museum of Modern Art (MoMA) in New York. In 1994 he was present at the exhibition "The Italian Artist's Books of the Twentieth Century" at the Guggenheim Museum in Venice. He published the novel "L'asta delle ceneri" (Camunia) and returned to poetry with the collection "Oratorio dei ladri" (Mondadori). In 1998 he donated the sculpture "Seme d'arancia" to his native country.

In 2001, in the Santa Maria dello Spasimo complex in Palermo, he held the anthology "Emilio Isgrò 1964-2000". With The Torah Bees, the "insect cycle" begins. In 2002 he published the book of poems "Brindisi a l'amico infame" (Aragno), a finalist for the Premio Strega and winner of the San Pellegrino's Prize. Under the title "The erasure and other solutions" (Skira)Emilio Isgrò collects in 2007 in volume the writings published in newspapers and magazines as a critical-theoretical set of creative activity. The following year, the Centre for Contemporary Art Luigi Pecci of Prato realized the anthology "I declare to be Emilio Isgrò". In 2009 he exhibited at the Stelline of Milan. The following year the exhibition "Disobedience. Landing at Marsala and other Sicilies" held in Marsala. ." At the same time, "Var ve yok" opens at Istanbul's Taksim Sanat Galerisi while the "Fourteen Ottoman Codes" are on display at the Boghossian Foundation in Brussels.

In May 2011 he proposed the installation "Italy Sleeping", at the Gallery of Modern Art in Rome, for the celebrations of the 150th anniversary of the Unity of Italy. The work "Erasure of Public Debt" opens at Bocconi University in Milan. In 2012 the works "I declare I am not Emilio Isgrò"(1971) and "The Adventurous Life of Emilio Isgrò"are re-arranged in Milan, at the Royal Palace, in the testimonies of state men, artists, writers, parliamentarians, actors, relatives, family, friends, anonymous citizens (1972); as well as "The Italian Hour" (1985-1986) at the Galleries of Italy. In June 2013 the anthology exhibition entitled "Model Italy" is held at the National Gallery of Modern Art in Rome. In 2014 in the Gallery of the Uffizi enters his self-portrait "I declare that I am not Emilio Isgrò". In Milan his "Great Cancellation for Giovanni Testori" is placed in Piazza Gino Valle, in the new Portello district.

In 2015 he created the "Seme dell'Altissimo", a marble sculpture of 7 meters high, located inside the Milan Expo.

In 2019 he published the book of poems "What remains of God" (Ugo Guanda publisher).

Where do Emilio Isgrò's erasures come from? We can make assumptions since the artist never revealed the reason that led him to this gesture. We know that Emilio Isgrò, just eighteen, was involved in the staging of the first theatrical performance in the Greco-Roman theater in Tindari. But, in the poster that advertised the event, his name was erased. This is a first clue. The first work of Emilio Isgrò, just graduated from classical high school, was an editor at the newspaper Il Gazzettino in Venice, so in this job he had to correct the drafts and then certainly make corrections with relative erasures. This is a second clue. Apart from what has been said, it has also been assumed, from many sides, that the erasures was nothing more than a new beginning as it entailed the annulment of the previous one written, with millions, or perhaps billions, of books written. Starting in the 2000s, Emilio Isgrò introduces insects, bees and ants into his works. The meaning of these insects symbolizes the spread of culture and information that continues unceasingly, among the world's populations, by writers, journalists, communicators, etc., just as the work of ants and bees continues to ensure the survival of the anthill or hive

Our gallery has set up two exhibitions by Emilio Isgrò, the first in 2003 entitled "Reading is not a crime" and the second in 2007 entitled "The Madonna of Pythagoras splits the Magna Greece", on which the installation of the Ave Maria consisting of 12 tables of 210x45 cm was presented. This installation was subsequently donated to the Pecci Museum in Prato

Conceptual Art sets out to overcome painting-painting in favor of idea-painting or conceptual painting. In other words, in Conceptual Art it is more important the gestation of the work and the programming of its execution. It is therefore an art thought, reasoned rather than felt. Execution becomes a fact of pure assembly of objects that form the work. Of course the visual aspect does not disappear completely as traces of painting are often found among the authors, but they are traces of painting put in a certain order that springs from the artist's thought. A precursor of Conceptual Art is considered Marchel Duchamp with his famous "urinal". At moment among the great artists of Conceptual Art we put Emilio Isgrò with yours Erasion. Tags: Conceptual Art - Emilio Isgrò - Erasion